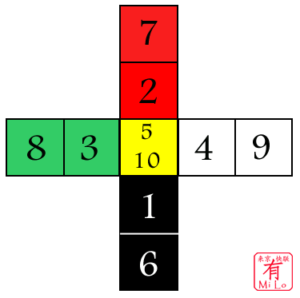 Composed from the He-Tu, the legend tells that this diagram appeared to Sage FU XI (2943 years before our era), drawn on the back of a dragon-horse which left the Yellow River.He devised the eight trigrams, in order to gain mastery over the world.

In classical Feng Shui, the He Tu combination of numbers embody the YIN and YANG pairings of the five elements. The He Tu numbers are derived from the Map of compass primary directions; North, South, East and West are represented by a He Tu pair of numbers.

Additionally to the above four pairs of numbers, 5 & 10 are said to represent earth energy residing in the center. The odd numbers are Yin numbers, while the even numbers are Yang numbers. The He Tu pattern is illustrated in the diagram shown below.

Composed from the He-Tu, the legend says this diagram appeared to Sage FU XI (2943 years before our era), drawn on the back of a dragon-horse which left the Yellow River.He devised the eight trigrams, in order to gain mastery over the world.

Traditionally, Fuxi is considered the originator of the I Ching (also known as the Yi Jing), which work is attributed to his reading of the He Map (or the Yellow River Map). According to this tradition, Fuxi had the arrangement of the trigrams (八卦 bāgùa) of the I Ching revealed to him in the markings on the back of a mythical dragon horse (sometimes said to be a tortoise) that emerged from the Luo River. This arrangement precedes the compilation of the I Ching during the Zhou dynasty. This discovery is said to have been the origin of calligraphy.

Fuxi taught his subjects to cook, to fish with nets, and to hunt with weapons made of bone, wood, or bamboo. He instituted marriage.

Hetu Also called the River Map, it is a pattern of black (yang) and white (yin) dots. The Hetu represents the ideal world. Pattern of black and white dots on a mystical dragon-horse emerging from the Yellow River. In the diagram below the Hetu, the markings show structure and balance, with the white dots representing yang, the black dots, yin. This scheme becomes clearer when numbers are applied to the dot patterns. For example, the 7 white dots found at the top of the diagram correspond to the number 7 in the numeric structure of the Hetu. The 2 black dots beneath the 7 white dots correspond to the numeric value of 2, and so forth.
Disregarding the central 5 white dots and surrounding 10 black ones, you can see how the odd (yang) numbers are perfectly balanced by an opposing even (yin) number: 1 (yang) is opposite 2 (yin); 3 (yang) is opposite 4 (yin); 6 (yin) is opposite 7 (yang), and 8 (yin) is opposite 9 (yang). Upon closer examination (again, disregarding the central 5), notice how all of the odd (yang) numbers and even (yin) numbers add up to 20: 1 + 3 + 7 + 9 = 20; 2 + 4 + 6 + 8 = 20. 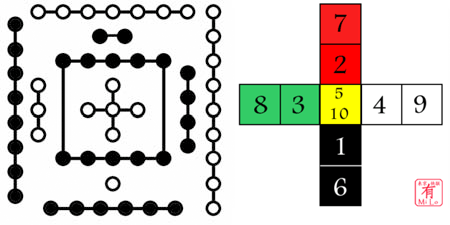 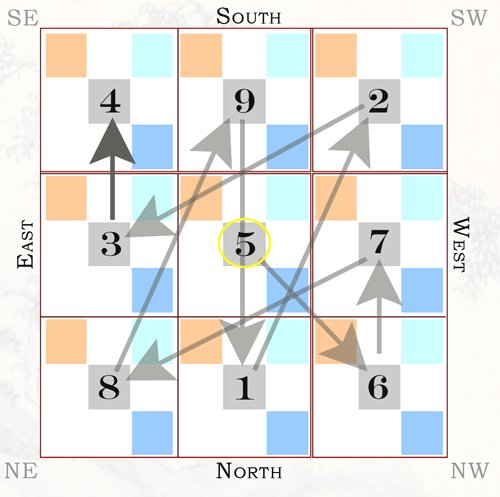 Now we can see the connection to the Luo Shu and He Tu combination Numbers..