Feng Shui is a system of laws that govern spatial arrangement and orientation in relation to the flow of energy (chi), and whose favourable or unfavourable effects are taken into account when siting and designing buildings. Feng Shui Time is more personal it’s about you it resonates around the Time of your birth; Feng Shui Time uses Xuan Kong Feng Shui techniques but replaces the “Orientation” with “Time” so in a Time Star Chart the “Sitting Direction” is replaced with a person’s “Birth Date” and the “Facing Direction” is replaced with “Now” or some “Fixed Future Date”, the “Luo Pan Compass” is replaced with an integrated “Luo Pan Clock/Calendar” 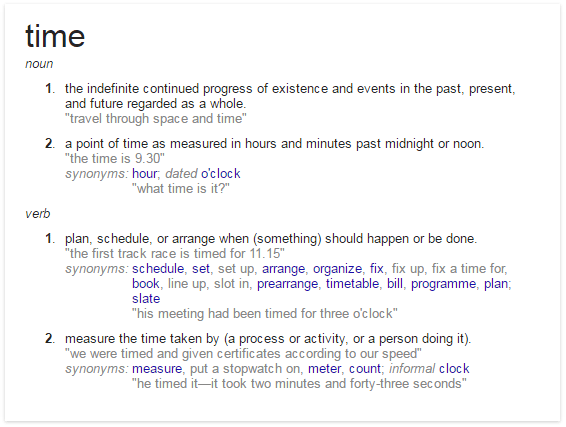 Defining Time!
Ask any scientist “What is Time?” and they can’t explain! it’s too complicated, except for Albert Einstein he just says it’s “Relative”…

Xuan Kong Flying Star feng shui or Xuan Kong Fei Xing  is one of disciplines in Feng Shui, and is an integration of the principles of Yin Yang, the interactions between the five elements, the eight trigrams, the Luo Shu numbers, and the 24 Mountains, by using time, space and objects to create an astrological chart to analyse positive auras and negative auras of a building or a time slot.

What are the 24 Mountains and how do they relate to Feng Shui?

When undertaking a Classical Feng Shui audit use of the Luo Pan compass is an important part of the process.  The 24 Mountains appear as one of many rings on a Luo Pan and it represents 24 directions employed by consultants when analysing a property and the fortunes of its residents using formulas like Flying Stars and Eight Mansions Feng Shui as well as studying the BaZi charts of the occupants.

How are the 24 Mountains calculated?

A standard compass is separated into 360 degrees with the primary directions of North, East, South and West and the four secondary directions of Northeast, Southeast, Southwest and Northwest each covering 45 degrees. The 24 Mountains of the Luo Pan is no different, however the 45 degrees are then further sub-divided and it is this sub-division that sets the 24 Mountains ring apart.

The sub-sectors are all either Yin or Yang; they represent one of the four elements* of water, wood, fire and metal.  Finally, each of the four corners is denoted by four of the eight trigrams (four members of the family unit.)  Northwest (NW2) is the position of Qian (male), Northeast (NE2) houses Gen (youngest son), Southeast (SE2) is the home of Xun (eldest daughter) and Southwest (SW2) is the location of Kun (female.)

But as we know in the Julian calendar year is divided into 12 months and 365.25 which means every 4 years an extra day is added to balance it out (very Feng Shui) , this extra day in the year is called a leap year. Instead of using ratio of 1 degree = 4 mins we will concentrate on a more accurate division of actual time by using the months in a year, taking into consideration each month has different amount of days ranging from 28 to 31. Each month is equal to 30 degrees i,e 360 / 12 = 30 so each month segment is 30 degrees exactly but as we mentioned each month has a different amount of days i,e January has 31 days and April has 30 below is the breakdown for each day/month. 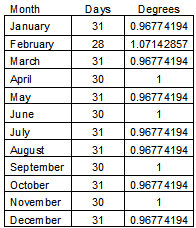 As we are using Xuan Kong Feng Shui method we will calculate a person’s Birth date in the same way we would using the Luo Pan and instead of directions we use the time method , here is our example for a birth date 28th September 1961.

Below is one of the nine Date/Time charts used to calculate the personal number/element for further calculations using the Xuan Kong Flying chart. 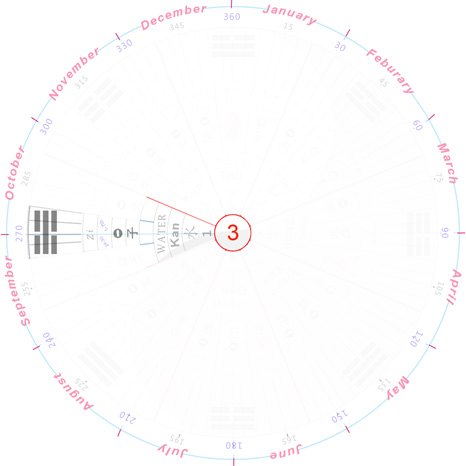 Notice how each sub sector uses the formula +– or -++
So an Odd numbers would use the formula +– and an Even numbers uses -++ , this formula is vital because it determines if the chart is floated in a positive or negative fashion.
Remember number 5 resides in the central palace and will always take on the properties of the period it is being calculated in. 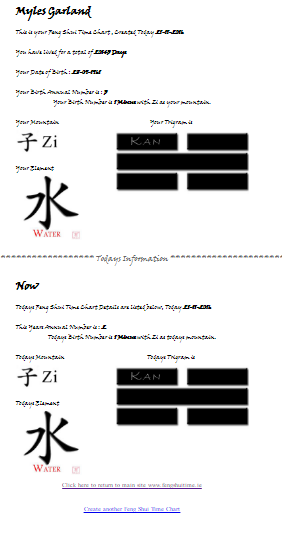